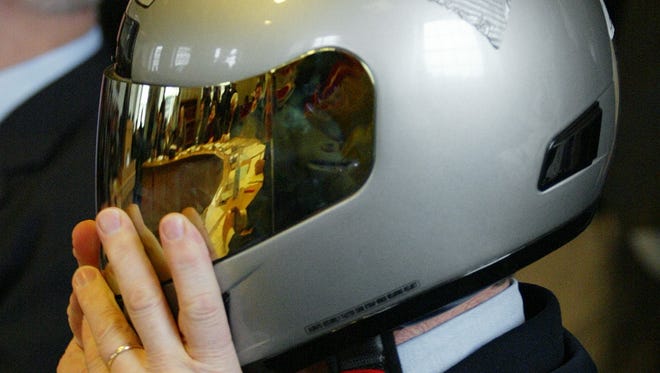 Riding a motorcycle is dangerous enough without adding the risk of not wearing a helmet. Motorcycle helmets should be mandatory in order to protect riders from serious head injuries. Head injuries are one of the leading causes of death in motorcycle accidents, and wearing a helmet can greatly reduce the severity of these injuries.

In addition, helmets can also help to prevent other injuries such as facial fractures and eye damage.

There are pros and cons to both sides of the argument. On the one hand, wearing a helmet can help protect a rider in the event of an accident. On the other hand, some riders feel that helmets can impede their vision and hearing, and make them feel claustrophobic.

Why Motorcycle Helmets Should Be Mandatory?

Motorcycle helmets are one of the most important pieces of safety gear that a rider can wear. They protect your head in the event of a crash and can help prevent serious injuries or even death. That’s why it’s so important that all riders wear a helmet every time they get on a motorcycle, no matter how short the ride may be.

Most motorcycle crashes happen at low speeds, but even a minor fall can cause serious head injuries. A helmet is the best way to protect your head in a crash, and it could mean the difference between walking away from an accident unharmed or suffering from a debilitating brain injury. Wearing a helmet also reduces your risk of being killed in a motorcycle accident by 37%.

And for every 100 riders who are killed in motorcycle accidents while not wearing helmets, another 14 lives could have been saved if they had been wearing helmets. There are some states that have mandatory helmet laws for all riders, regardless of their age or experience level. Other states only require riders under the age of 18 to wear helmets.

But even in states where helmet use is not required by law, it’s still strongly encouraged. So whether you’re riding in a state with a mandatory helmet law or not, always make sure to strap on your helmet before heading out on your motorcycle. It could save your life.

Why Should Helmet Laws Be Mandatory?

There are a number of reasons why helmet laws should be mandatory. First and foremost, they can save lives. Head injuries are one of the leading causes of death and disability in bicycle accidents, and wearing a helmet can greatly reduce the severity of these injuries.

Second, helmets can help reduce the cost of medical care associated with bicycle accidents. Head injuries often require extensive and expensive medical treatment, and preventing these injuries can save billions of dollars in health care costs each year. Third, mandatory helmet laws send a strong message that bicycling is a safe activity that should be encouraged.

When cyclists wear helmets, it shows that they take their safety seriously and care about protecting themselves from harm. This helps to create a more positive image of bicycling as a whole, which can encourage more people to ride bikes instead of drive cars (which is good for both public health and the environment). Fourth, mandatory helmet laws help to level the playing field between cyclists and motorists.

Cars are required to have certain safety features (like seat belts and airbags), so it only makes sense that bicycles should be subject to similar regulations. By requiring cyclists to wear helmets, we treat them like any other road user and show that we value their safety just as much as we value the safety of drivers and passengers in cars. Finally, mandatory helmet laws help ensure that everyone has an equal opportunity to enjoy bicycling without putting their health at risk.

No one should have to choose between being safe on their bike or being able to afford basic necessities like food or housing; by requiring helmets for all cyclists regardless of income level, we make sure that everyone has an equal chance to enjoy this healthy activity without having to worry about suffering serious injury if they happen to fall off their bike.

What Happens If You Don’T Wear a Helmet on a Motorcycle?

If you don’t wear a helmet on a motorcycle, you are increasing your risk of sustaining a serious or fatal injury if you are involved in an accident. A helmet protects your head and can help to prevent or reduce the severity of a head injury. without one, you are more likely to suffer a skull fracture or traumatic brain injury.

Wearing a helmet also increases your chances of being seen by other motorists and can help to prevent accidents.

Why Do People Oppose Helmet Laws?

There are a number of reasons why people might oppose helmet laws. Some might argue that such laws infringe on personal freedom, or that they are ineffective in reducing injuries. Others may simply find helmets uncomfortable to wear.

Those who object to helmet laws on the grounds of personal freedom typically argue that adults should be allowed to make their own choices about whether or not to wear a helmet. They may also point out that mandating helmet use could have negative consequences, such as deterring people from riding bicycles altogether. Those who believe that helmet laws are ineffective often cite studies which show that while helmets do reduce the risk of head injury, they do not necessarily prevent all injuries from occurring.

They also point out that many cyclists already wear helmets voluntarily, so a law may not have a significant impact on overall safety levels. Finally, some opponents of helmet laws argue that wearing a helmet can give cyclists a false sense of security and lead them to take more risks than they otherwise would.

Should Motorcycle Helmets Be Required?

Motorcycle helmet laws are a controversial topic. Some people argue that they should be mandatory, while others believe that riders should have the freedom to choose whether or not to wear one. Here, we’ll explore some of the arguments against motorcycle helmet laws.

One argument against motorcycle helmet laws is that they infringe on personal freedom. People should be able to make their own choices about whether or not to wear a helmet, and mandating helmets takes away that freedom. Another argument is that motorcycle helmets can actually be dangerous.

This is because they can restrict vision and hearing, and can also come loose in a crash, causing more harm than good. Finally, some people argue that motorcycle helmet laws are ineffective. They point to studies which show that there is no clear evidence that helmets actually reduce the risk of injury or death in a crash.

So, those are some of the arguments against motorcycle helmet laws. What do you think? Should riders be required by law to wear a helmet?

There are a lot of debates surrounding the topic of whether or not motorcycle helmets should be mandatory. Some people argue that it should be a choice and others say that it should be required by law. There are pros and cons to both sides of the argument.

Those who believe that motorcycle helmets should be mandatory argue that it is a safety issue. They point to statistics which show that motorcyclists who wear helmets are much less likely to be killed or seriously injured in an accident than those who do not wear helmets. They also argue that wearing a helmet can help to protect you from other road users, such as drivers who may not see you because you are on a motorcycle.

Those who believe that motorcycle helmets should not be mandatory usually cite personal freedom as their main argument. They argue that people should be free to choose whether or not they want to wear a helmet, and that mandating helmet use would take away this freedom. They also argue thathelmets can actually be dangerous, as they can restrict your vision and hearing and make it more difficult to balance yourself on your bike.